A Magpie Portrait Leads to an Unexpected Photo Series

In Glacier National Park, in the heart of the Rocky Mountains just south of the border in northwest Montana – while photographing Grizzly Bears, Black Bears, Bighorn Sheep, and Mountain Goats – I turned my attention back to feathered wildlife when I spied Black-billed Magpies visiting a mountain water feature – a rainwater puddle. Perhaps I could move my mobile photo blind (my car) into position to get a photo or two.

My initial intent was get a photo to illustrate the iridescent colors of the wing and tail feathers of the species, so I instinctively positioned with the sun behind me, thereby illuminating the birds to emphasize the vibrant coloration of any magpies that would visit the established water hole. I tested the lighting to ensure that with an adequate f-stop to provide enough depth of field, a basic f8, the camera would also have ample light to provide a fast shutter speed to stop any action – perhaps during a take-off I speculated. 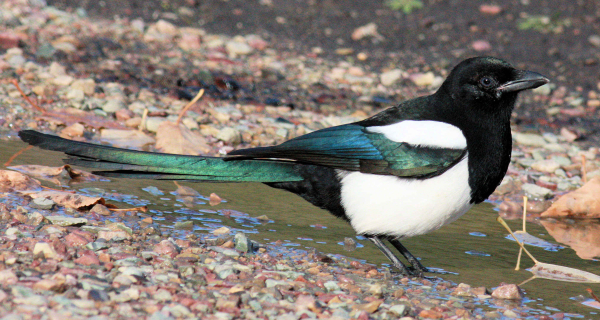 The right light provided a rainbow of iridescent colors to tail and wing feathers of a Black-billed Magpie attracted to a rainwater puddle for a mountain photo session.

After a short wait, a magpie landed nearby and hopped three times to the edge of the rainwater basin – perfect start. I took a quick image, followed by another as it paused to look my way. The afternoon sunlight provided just the right light to highlight the electric green, blue, violet, and even golden hues in the tail and wings while bringing out the subtle details of the black eye and bill against the black feathers of the head and breast. Without adequate sunlight, magpies turn into mere pied black and white birds that show no hint of the rainbow of colors that these long-tailed corvids possess.

A moment later, the magpie dipped its head and began drinking, so I added a couple photos of the process without a change of lighting or camera settings. Then, the unexpected and unprecedented action of the wind changed the tranquil photo session to a momentary flair of action. As the magpie lowered the front part of its body to drink, its back half raised up, only slightly, but a strong gust of west wind propelled through a mountain pass caught the long tail feathers and even its wings like sails and raised them high overhead. The blast of air may have toppled the magpie had the bird not immediately raised its head to balance the wind’s action and permit the bird to regain its composure and its command of its long tail before electing to fly from the rainwater. 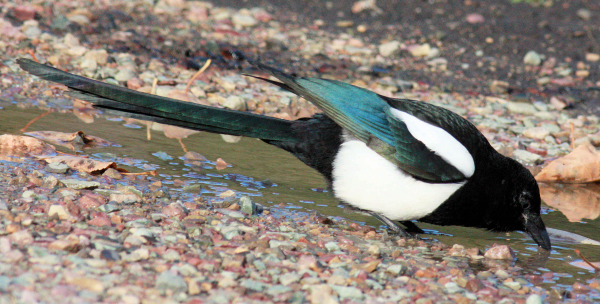 An extended drink left the magpie vulnerable to gusting wind as its tail and wings became elevated.

The resulting photos are testaments to being prepared for the unexpected, watching your subject through your viewfinder during the entire photo session with your finger on the shutter button, and being prepared for an unimagined circumstance. Even more, it provided a dramatic image that accented a three-photo series that attracts a lot more attention than the preceding photos. Then too, the wind-blown photo doesn’t stand alone very well. It lacks the color of the preceding photos, so it needs the lead-in images to set the series up – the approach, the drink, and the reaction to blast of mountain wind. It’s the anchor of an unexpected photo series.

While you can’t really expect a series opportunity to transpire, it’s good to keep the possibility of it happening in mind, while always being alert for the unexpected. Speaking of which, the unexpected might be a thirsty bear.

Caught like a sail by a rogue gust of canyon wind, the magpie’s tail blew high above its head, catching the magpie off-balance and vulnerable to capsizing. Note that the iridescent feathers of the wings and tail were limited to black coloration when the feathers were out of prime exposure to the sunlight.

A photo series can add a lot to a photo presentation, website, or Facebook post, but there is no set recipe for what constitutes a photo series. It can be three photos, four, or five; but maybe not only two images. It can include a flight sequence, a behavioral display, a fight series, or a take-off or landing sequence. It may even be a series of photos taken over an extended period of time, showing different ages of nestlings or hatchlings; a series can illustrate different molts of birds, or show the variety of birds that visit a favorite feeder. Have you taken a series of photos already, or is this a new option for a future photo plan?

Share your bird photographs and birding experiences at editorstbw2@gmail.com