What is it about spring that gives us the urge to move, to travel, to explore? Maybe as birders we are more susceptible to an inner desire to seek out new birds in new places as spring drives new birds to migrate north to add renewed energy and songs wherever they stop. As photographers, the desire to travel and search out different locations with different birds is especially acute when we can time our trips to take advantage of birds making a migration stop for a few hours or a few days in between their Latin American wintering areas and their summer range in northern forests or Arctic landscapes. This is especially true for those of us who have a special attraction for small colorful active songbirds – especially warblers, tanagers, orioles, buntings, vireos, and more.

It's hard for non-birders to understand that attraction, and even for birders, it can take years before you acquire that spark that ignites a neotropic songbird attraction. Then again, some birders are immediately drawn to small songbirds by their colors, behaviors, and their all too short period of abundance each spring. But observing small songbirds, centered on the American warblers, and photographing them, is as different as driving a car and flying an airplane. Even the difference between photographing large birds like wading birds, waterfowl, and raptors, and photographing small birds like warblers, vireos, kinglets, and even thrushes is very different. But gosh, when you catch the songbird bug, especially the songbird photography bug, it’s a seasonal marvel with an anticipation level that builds and forces some of us to do unimaginable things – at least to those who are unacquainted with this particular form of desire.

In my early years, I had a limited interest in small songbirds; but over the years I became more and more interested in them. I’d hafta say that when I returned to North Dakota for a couple years after the turn of the century that warblers became a bigger interest – and I began seeking them out during spring migration and trying to photograph them with limited success. During my return to California for a decade, I took advantage of songbird photo opportunities, but it was after my most recent return to Dakota and my first spring, in May of 2017, when the bug really bit me. Even so, I stayed pretty close to home and enjoyed the variety of warblers that visited my nearby migrant trap – Melody’s Grove, which helped me to fully appreciate photographing migrating warblers, orioles, vireos, flycatchers, and other small birds that foraged and rested on the low trees and bushes after an overnight migration flight.

But those few spring days when songbirds were present in their limited species eventually were not enough to satiate my songbird photo desires. And that’s when I began making a spring pilgrimage to songbird migration hotspots of national and international renown to get a full dose of songbird photo excitement; primarily Magee Marsh in northwest Ohio, and High Island in southeast Texas. I have been to other songbird hotspots, including Cape May, New Jersey; but I had very limited photo ops because most songbirds when I visited were high in the trees. So after a month of deliberation about where to go this year, I came to the choice of returning to Magee Marsh, about a half-hour east of Toledo, Ohio, on the southwest shore of Lake Erie. 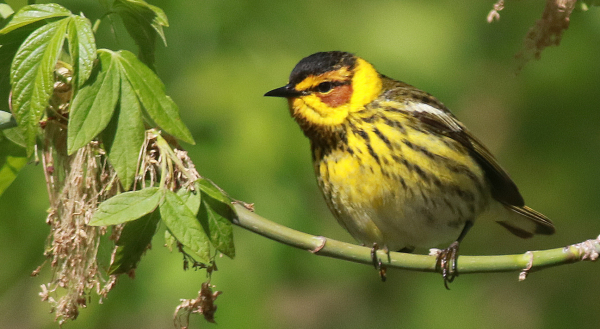 A peaceful image of a Cape May Warbler perched low among the green landscape of Magee Marsh provides a bit more of a “warbler scene.” By using a narrow aperture of f6, the background vegetation is blurred into a pleasing green while leaves and dried flowers within the bird’s plane of focus are sharp.

As it became closer to prime songbird migration time, I began watching the 2-week weather forecasts, and almost immediately it seemed like I had made the wrong choice. It appeared that the last days of April and first days of May were perfect for songbird migration at High Island, along the Gulf Coast of Texas. But it was too late; by the time I saw the weather report, I should have been there and the Gulf was 2 days away. By comparison, the first week of May appeared to be poor at best for Magee Marsh with north winds and rain much of the time. But it looked like the second week of May had a couple choice days with sunshine mixed with clouds and a south wind – especially on Wednesday the 10th of May through that Friday. Every couple days the weather report improved and a week before that Wednesday, the weather wizards suggested similar weather from Tuesday through Friday! With a north wind and rain persisting until the Saturday prior to that week, it looked like a perfect situation with most songbirds probably waiting for the wind to change from northerly to southerly – so I worked extra time to get ahead on my editing duties and hit the road Saturday to be on the boardwalk at Magee Marsh by Monday morning! Hoooray! It would be a glorious week I’m sure!

Then too, about the same minute that I return home, the first orioles and hummingbirds should be arriving, along with the beginning of the parade of warblers, vireos, flycatchers, and other migrants that will stop at Melody’s Grove, just a couple hundred yards to the southeast of my office desk for a few hours or a few days, replaced by others over the course of the following 2+ weeks – until about the end of May. Hoooray! The excitement of migrating songbirds will fill my neighborhood, and even bring them to my own yard! Hoooray!

So obviously, I will be sharing insights into my experiences and the equipment and techniques I use to photograph these little birds, along with a host of tips and insights that I’m sure will serve you well in days and weeks and years to come. I expect to have some favorite images to share with you, and by the time you receive this “letter,” which will be sent out Wednesday May 11th, it will be prime time for songbird photography at Magee Marsh! Wish me luck! In the meantime, please enjoy some of the favorite warbler photos I took at Magee Marsh during my first visit there in May of 2019, and wish me luck!