Play the Percentages – Focus on the Action

Last Wednesday I observed a dozen Rough-legged Hawks on my way to Bismarck, and enjoyed several fleeting moments of photo potential. Each hawk gave me a little jolt of excitement with the chance of a photo opportunity in nice afternoon light. Likewise, each hawk provided a set of unique circumstances for me to assess and try to react to. By the time I approached the 10th Rough-leg, as it hovered in a stationary flight characteristic of this Arctic-nesting raptor, I moved into position with the sun at my back and the hovering hawk framed in my camera lens. 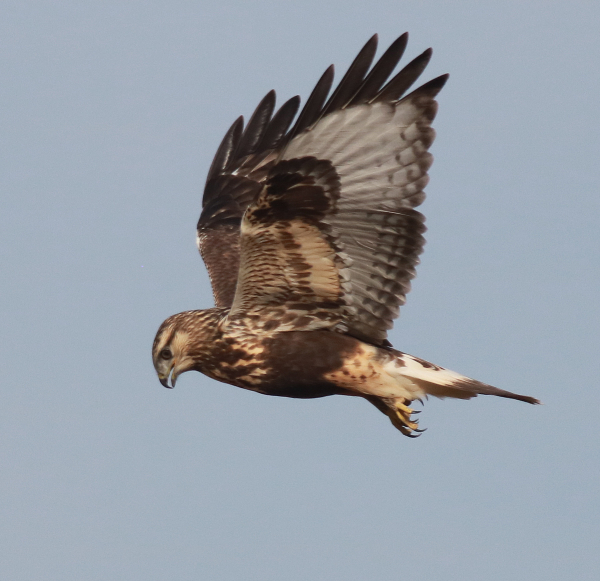 This 5-photo series of a hovering Rough-legged Hawk and its resulting flight was successful due to excellent lighting, a fairly close approach that didn’t affect the bird’s behavior, the precise reaction of autofocus during the fast action, a fast shutter speed, and more.

I took a series of photos that showed the hawk with its wings in a number of positions above and below horizontal as it hovered. It’s interesting to note that while hovering, the hawk’s head and eyes were kept in a pretty static position – and that’s the point of hovering. In essence, hovering creates a stationary “platform” from which it could zero in on a small rodent in the prairie grass below. The hawk obviously had something in sight and could drop into a sharp dive toward prey at any moment. Its talons were already open and ready for action, and I was ready to photograph its next move.

Even so, I was a bit surprised when the Rough-leg pulled out of its hover by spreading its wings wide and shifting its body in my direction. I didn’t really need to react aside from pressing my camera’s shutter release button in timely fashion, and by the second post-hovering photo it seemed like the hawk had its eye on me rather than a mouse or vole. That’s about the time I needed to follow the Arctic raptor as it veered away and banked, providing a nice image of the bird’s back and spread wings, and a final photo that almost looks as if it is looking back with a high wing wave to acknowledge my focused attention. 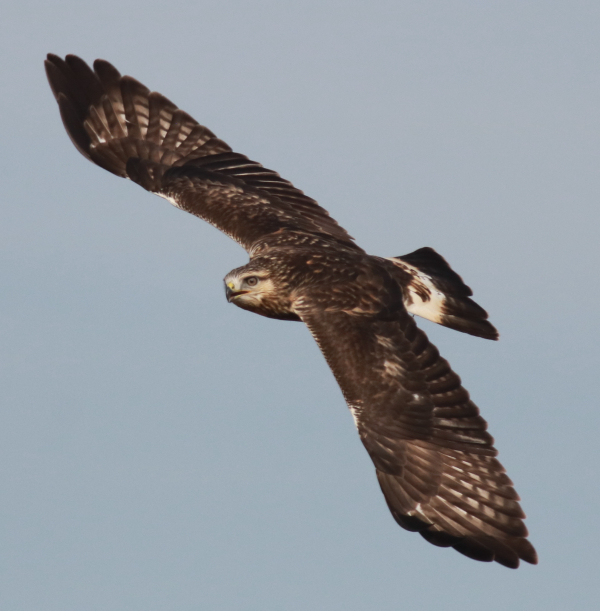 After an extended period of hovering, without warning the hawk spread its wings and flew toward the photographer.

As it turned out, my photo opportunity was 1 in 10 – 10 percent; was that good or bad? Well, it was actually 0 percent until I photographed that 10th Rough-legged Hawk. And I observed 2 more Rough-legs that I wasn’t able to photograph, so that brings my photo success percentage down to about 8 percent. But it’s always worth playing the photo percentages, because when you get a nice photo, or an exciting photo, none of the misses or potentials matters – only that photo or photo series that is produced matters, along with the enjoyment of birding – the search, the observations and study, the count and the increased understanding of the pulse of the on-going migration season.

I’m quite happy with the resulting photo series I took of Rough-leg number 10, and it’s proof positive that it’s worthwhile to keep trying, put in the time, make the extra effort, cross your fingers, and eventually you should get the chance to photograph a bird of your choice. It’s not a matter of percentages, it’s a matter of persistence and enjoying the process. 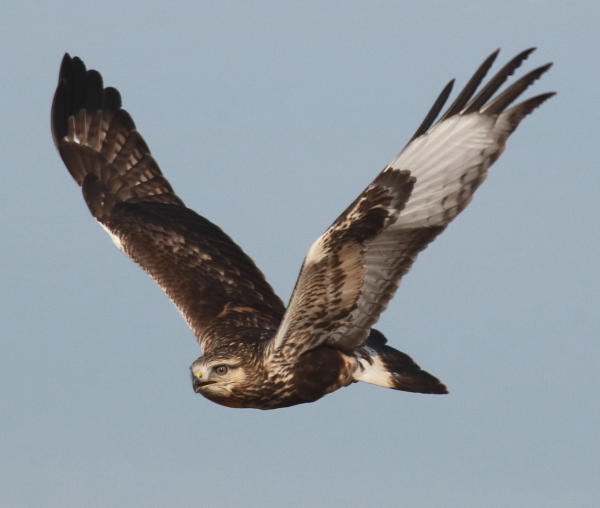 Note the sharpness of the eye and other features of the hawk in this series of photographs. Using an f8 aperture, the sunlight provided a super-fast shutter speed of 1/2500 for this image.

It can take years to get a fine photo of a select species you hope to photograph; sometimes you get lucky early on, other times it can take years. It’s funny though, often once you get your first good photo of a given bird species, one that you have been hoping and trying to photograph for years, it seems like you break through an invisible wall that gives you plenty of photo ops of that species after that initial breakthrough. I experienced that with Snowy Owls, Wood Ducks, Golden Eagles, and many more birds. 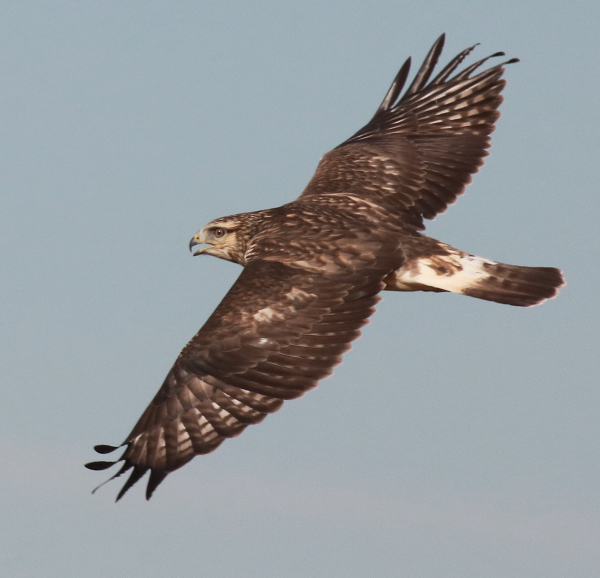 The hawk provided a variety of “poses” as it flew and tilted in different ways that makes this series of photos all the more interesting.

When reviewing the photos that illustrate this article, please note the sharp focus on the eye of the hawk – the hawk eye. In each photo you can not only see the iris of the eye, but the white dot in its midst of the iris that is actually the reflection of the sun, which indicates the bird is receiving the full effect of the ambient sunlight, which likewise provides the detail of individual feathers. You can even see the sunlight reflecting off a few primary wing feathers on the far wing in some of the images.

As I often point out, it’s important to focus on the bird’s eye when you are photographing. Of course, when photographing birds in flight, we rely heavily on the autofocus feature of our lens and camera. What a remarkable feature autofocus is for us! But keep in mind that autofocus usually works best when you’re relatively close to a bird. (Lately, I’ve been having trouble with my autofocus when birds are a little too far away; keep that in mind if you have that trouble too.) 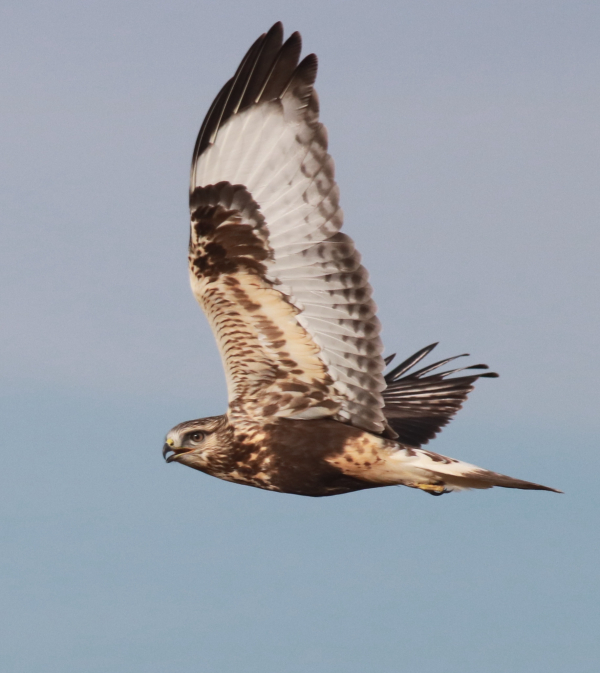 Sharp feather edges, perfect colors, and a clear look at the hawk eye that shows the white reflection of the sun makes this a fine closing photo of the Rough-leg series.

The sharpness of the photos in the Rough-leg series comes from being prepared for the circumstances, and especially because I had the advantage of strong afternoon light. I knew I could get a fast shutter speed, so used an f-stop of f8, which provides an adequately wide area in focus around a bird. Then, using my Av aperture-priority setting, the camera automatically set the shutter speed at 1/2000 and 1/2500 of a second for the 5-photo Rough-leg series – fast enough to provide a sharp focus on the eye and other features of the hawk in motion.

At the same time, not every photo session has a happy ending like the episode with the Rough-legged Hawk. Two days later, on Friday, I had a wonderful opportunity to photograph a young Bald Eagle as it flew in a half-circle toward me, but this time I failed the exam, as did my autofocus, mostly due to the quality of sunlight available ... but that’s part of playing the percentages game too.

To take this analysis a step farther, it probably came down to the subdued sunlight in the end. During the eagle’s half-circle flight, I took 25 photos of which 6 were semi-sharp – not great. But, the best of these photos isn’t bad and I share it here as an illustration that although not every photo works out, if you get that one image that fulfills your hope for a given photo opportunity, that’s a success! And if you get a series of photos, celebrate the action. Appreciate what worked well, what didn’t work, learn from the experience, and try to improve on your efforts next time. Bird photography is not an easy or exacting activity to say the least. You can’t control wild birds, and cameras and lenses are not any more infallible than we are.

Bird photography can be difficult, but when everything works – the lighting, sharpness, colors, action, positioning, setting, and other elements – it is magic, and it provides a particularly fulfilling personal sense of achievement. It’s always fun to reflect on our birding experiences, and a nice photo can help to keep us looking for the next bird and the next photo opportunity. It helps us appreciate each bird we encounter, and appreciate how lucky we are to interact with the natural world through birds and birding. Keep appreciating those opportunities and keep photographing; you will be rewarded richly over time.