In a full banking stretch facing into the sunlight, the size and strength of a Turkey Vulture is impressive. At times, the 6 vultures appeared to be more playful than deliberate in their low circling flights.

After sending off last week’s issue of The Birding Wire last Tuesday afternoon, with a very strong south wind blowing up the road I had second thoughts about looking for the “black hawk.” With that wind I figured raptors would be seeking shelter and exceptionally hard to find, only to look up and see 2 Turkey Vultures gliding low overhead, tilting this way and that above my yard! Then another came into view to the north headed my way. With my camera in hand, I realized this might be my best photo opportunity of the afternoon – now, here.

I raised my camera and trained my lens on the incoming vulture as it veered to the east a bit, and before it was in focus it slipped behind a tree. I waited for it to return, checked for the others to the south, but none were in sight so I hopped in my vehicle to see if I could relocate the vultures. As soon as I cleared the trees I could see 4 or 5 Turkey Vultures swirling and zooming and bucking the strong south wind 150 yards to the east. By the time I drove 100 yards, the vultures were making very long circles just above tree line – headed my way. 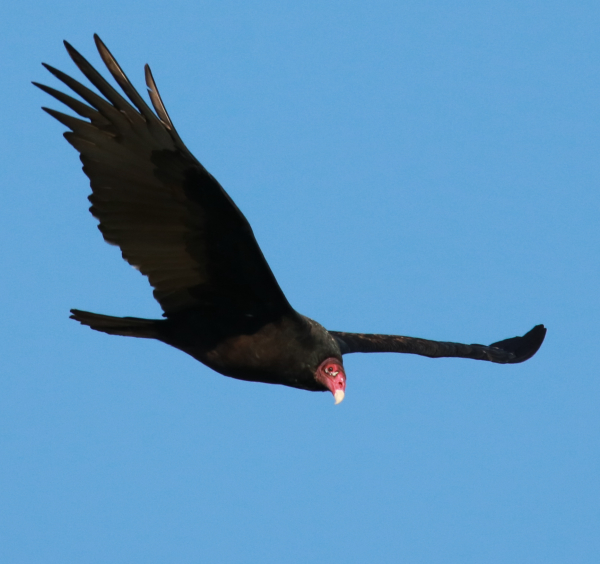 To make headway against the strong south wind, the vultures used gravity to propel themselves forward by angling downward without ever beating a wing. Although only the head of this vulture was illuminated in this image, it is a good example of how vultures often look in flight.

I stopped, stepped out of my van, and quickly picked out one of the vultures to follow through my camera lens, taking photographs when the bird tilted in just the right way to catch the late afternoon sunlight. I followed one vulture until it left the best-light zone or banked away, only to focus in on the next closest vulture as it glided southbound, and there was another one after that, followed by the next one – what fun! Fast and exciting foto fun!

I soon realized I was reacting to a half-dozen circling vultures gliding against the strong south wind, using gravity to move forward by angling slightly into a dive for a couple hundred yards, then banking into the sun and following through in a circular route. Gliding back into the south wind the vultures would teeter this way and that, veering to the right, then the left and rising upward to glide forward using gravity. Now consider this action multiplied by 6 in close association and you will better envision the fast-action vulture flights I was immersed in photographing.

Then they were gone; and I was back in vehicular pursuit, relocating another 100 yards east and 80 yards south where I could photograph the Turkey Vultures as they approached from the northeast. The sunlight provided primetime lighting at 5:15, and I could vividly see when the underwings of the vultures caught and reflected the sunlight. I also tried to watch for when shadows were formed on the birds, especially the wings, and when shadows were eliminated. The action was fast, exciting, fun, and it filled me with a burst of adrenaline.

As always, I never use an automatic camera setting, but I almost always have the Mode Dial turned to the Av setting; then set my aperture (f-stop), and the camera automatically provides the associated shutter speed with respect of the amount of available light. In this case, I preset my aperture to f7, which provided a 1/1600 second shutter speed – very fast – using an ISO of 400.

Although 1/1600 is a very fast shutter speed that stopped the flight action of the vultures, as I handheld my camera and lens while standing outside photographing in the open, I braced my elbows against the sides of my chest to provide an added level of stability. As always, I also held my breath whenever I was taking a photo, or anticipated snapping a photo or a series of photos.

Suddenly, the vultures were out of view again, and I tried to follow, but they zipped northward propelled by the south wind and it was pretty obvious this exceptional photo session was a wrap. In the end, the wind was so strong that I knew an extended birding drive would most-likely be futile. I also knew that I had just enjoyed 20 minutes of fast-paced photography that provided a wealth of images to review, choose the best, and edit some in a simple fashion – primarily just by cropping extraneous sky from the photo. Rather than my usual 2 or 3 hour afternoon birding drive, I decided I did the best I could under the super-windy conditions – fueled by the lively Turkey Vulture 6.

So, yes it can happen, when you least expect it a photo opportunity can suddenly appear overhead on black and silver wings. Keep the sun at your back, your shadow pointing at the birds, and all that’s left is for you to react with your camera and enjoy the opportunity! 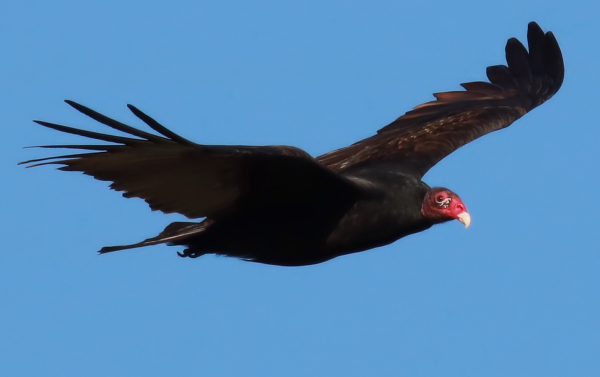 Some people don’t like the look of vultures, but when you study the birds during their best gliding flights, you must appreciate their aerial prowess and the thrill of photographing them in action.