March tends to be unusually windy, and when you mix wind with migrating birds, you can get some exciting photography opportunities. Much of a birds’ day is spent feeding, which may include searching for food. But once a food source is located, social birds that congregate in large flocks during spring tend to follow flight paths from a resting area, a roost site, or a safe haven to a feeding location.

Ross’s Geese occasionally stood out among the super-flocks of Snow Geese that were photographed along a flight path from a concentration area to a nearby feeding site.

Take Friday the 13th for example, when I spent an hour photographing geese and ducks adjacent to Sand Lake National Wildlife Refuge as they flew from a shallow marsh where they rested, preened, drank, and socialized to the middle of a harvested corn field. You wouldn’t want to disturb the birds in either of these locations, but when flocks began breaking away from the marsh and flying to the feeding area, it was quickly apparent where the flight path was and where I could position myself to photograph the action.

The results were surprising! I hoped to get the chance to photograph a few flocks relatively close and illuminated by the afternoon sunlight. Within moments I fulfilled that hope and the flocks of geese kept coming. I parked on the side of a virtually unused gravel road almost half a mile away from the feeding geese. I positioned my vehicle between the geese and the sun, with the sun at my back. Once in position, the geese seemed to have little concern for my vehicle, and at times the action was fast-moving with flock after flock passing – mostly White-fronted Geese, many flocks of Cackling Geese, a few Canada Goose flocks, and some flocks mixed with two or all of these exciting species, which added to the fun.

You need to be versatile too: A week later – last Friday – I returned to the same location and found quite a different situation, featuring a different combination of geese, with a different flight plan. The expansive flocks of Snow and Ross’s Geese present surprised me at first, but I immediately knew I would need a new strategy. Because the Snows and Ross’s Geese quickly elevated as they left the marsh, it was necessary to move in closer to their resting site to photograph them while they were still flying pretty low. Luckily, there was a refuge viewing area that provided that opportunity. Instead of positioning along their flight path, I was able to park near the wetland edge to take advantage of photographing the flocks as they left the river floodplain. 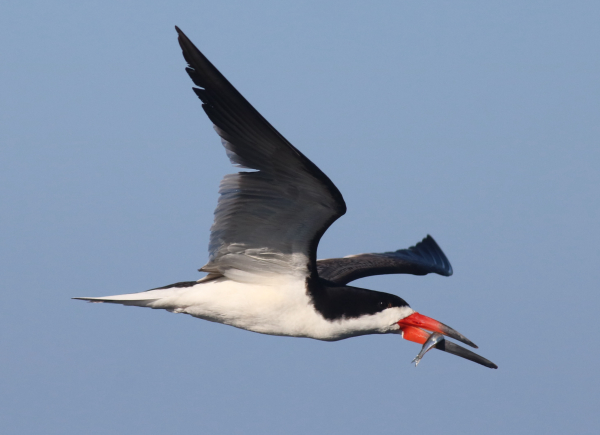 A summer flight path provided prime photo opportunities for Black Skimmers and a variety of terns as they returned from fishing forays to their nesting colony at Bolsa Chica Wetlands in Southern California.

Usually, it’s pretty easy to get a feel for how birds are using a flight path. Generally, for geese, ducks and cranes you can find a good photo location between their roost or resting area and their food. Then it’s a matter of timing your photo session to the period when the birds fly to the feeding fields, or when they return. Usually there is a morning flight and a late afternoon flight to and fro.

Another option is to watch how flying birds use the landscape: Ridgelines and woodland edges create an updraft when the wind comes from the right direction. Raptors use these landforms during migrations, although any birds will utilize this option at times; it makes flight easier when they can glide instead of physically winging it. This is useful wherever you may find such a flight path, but it is especially productive at raptor count sites, where a variety of birds are funneled by the landscape along a ridgeline.

As always, when you find a location to intercept regular flights of birds, see where you can position yourself with the sun at your back, which will likely be limited to a certain time of the day. Position yourself where you are relatively inconspicuous, or when possible, you may be able to use your vehicle as a “mobile blind.” Then too, you may find a site where birds are accustomed to people, which makes getting into position easier.

Ultimately, you want to use a fast shutter speed balanced with an adequate depth of field. Then you need to do your best to predict the movements of the birds you’re focusing on and try to depress the shutter button a moment in advance – otherwise, instead of getting a photo with the birds’ wings raised, or at the end of the downswing, the wings may be in an unappealing location.

A big help is to use your camera’s continuous shooting mode, which takes a number of photos per second. This option allows you to choose the frame you prefer most – or a couple of images in a series. Some photographers may prefer not to use this option, wanting to rely on their instincts as to when to take the ultimate photo. That’s OK if you prefer, but I found it becomes an upgrade on the whole photo experience to use the continuous shooting mode, and you are less likely to miss a photo opportunity. Even when you have your camera set on continuous shooting mode, you can limit the “continuous” to two photos at a time by just pressing the shutter button a moment rather than holding it down. 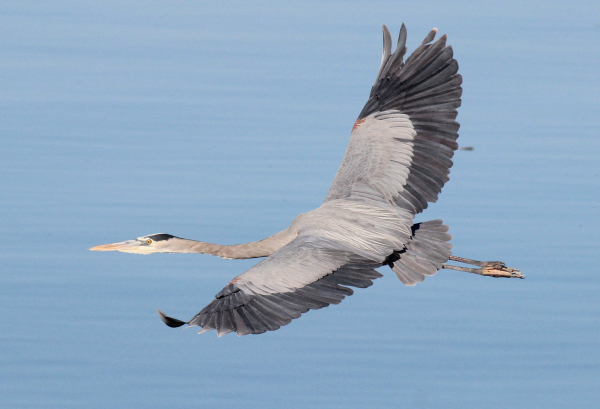 Finding a flight path used by herons and egrets between nesting and feeding areas in southern Florida provided a variety of photos as these elegant birds passed by. This Great Blue Heron extended its neck as it called after leaving its nest in a rookery several hundred yards away, providing a rare photo option; usually herons hold their necks bent back close to their body while flying.

Sometimes when working at a flight path location, you can add another dimension to the action by using your zoom lens and doing some in-camera framing. Or perhaps your zoom lens is your go-to lens, and in that case, you don’t need this prompt. Hopefully, you will have a number of days, if not a season, to do a little “flight path photography.” Spring is a perfect time to find some promising flight paths, but be aware, they may only last a short time, so make the most of any opportunities, and come back for more if you can. Enjoy the action!

Article and photos by Paul Konrad

Share your bird photographs and birding experiences at editorstbw2@gmail.com