My first Florida birding location on my on-going Gulf Coast road trip was Merritt Island National Wildlife Refuge, located just north of the Kennedy Space Center on the central Atlantic Coast. Among the exciting mix of birds I encountered along the way, little did I expect to find one of the most captivating birds I’ve encountered in a wealth of time. At first it was no big deal; I noticed the bird’s unusual plumage from a considerable distance across an open water area. My first impression was of a Reddish Egret, but it had a crazy mix of white and gray feathers that made it uniquely attractive, but I could discern no more from that considerable distance with binoculars.

Other birders were parked in the area, using a spotting scope, but they weren’t focused on the mystery bird. Knowing that Reddish Egrets have white morphs, I thought it might be a “mixed morph,” so to speak. Or perhaps it was a partial albino bird. I watched it a few more minutes, then decided I would return with the hope the bird would move closer to the edge of the Black Point Wildlife Drive. Regardless of its identity, I really wanted to get some photographs of this intriguing wading bird. 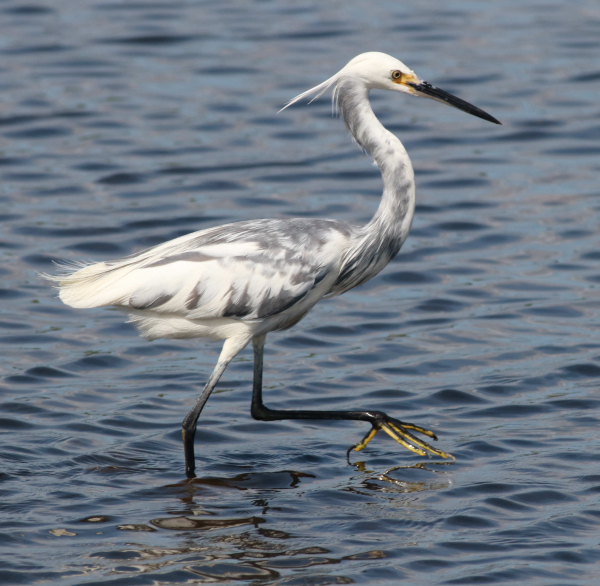 It’s not often that a birder gets to photograph a true “mystery bird,” a real surprise, and a remarkable thrill. The egret/heron is well-documented in this series of images.

Not to take away from the other interesting wading birds, waterbirds, shorebirds, and ducks along the way, my interest in getting back to the mystery egret (or heron) fueled the ensuing hour. When I returned to the open water area, hoping for a closer look and some photos of the mystery bird, but there was no sign of it. A bit disappointed, I kept aware as I inched forward where the open water turned into a feeder channel no more than 30 feet wide and lined by fairly tall vegetation. That’s when I caught a flicker of white plumage, and in spite of plenty of other birds with white feathers, I imagined it might be the subject of my current quest. Yes!

I continued my slow advance and parked on the opposite side of the road, to uncharacteristically get out and follow the bird as it hunted deliberately along the shallow water edges. Now I had a great look at the bird, and it was truly spectacular, without question feathered in a unique pied plumage that intensified my interest in getting some impressive documentary photos. And with the bird so close and so trusting, I believed I was indeed getting some nice images. At that point I really wasn’t questioning my original impression that this was a partial white morph Reddish Egret, and I was far too absorbed in photographing the bird now to question its true identity. 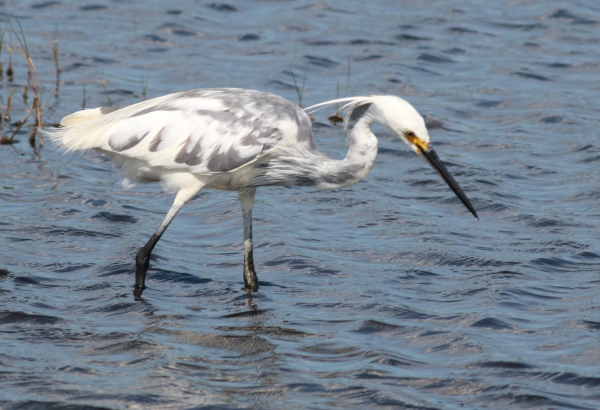 Suddenly, a White Ibis erupted from beneath my feet, or so it seemed as it called loudly and landed a few feet ahead. I feared the “egret” would flush, but it kept hunting a few more minutes, then it did take flight, returning to about the same location as I saw it originally – far across the open water pond. There, it again acted as I expect Reddish Egrets to behave while hunting, dashing one way then spinning around, taking a little flight then pouncing toward prey. I probably should have continued my drive at that point, but now the mystery bird had a solid hold on my attention – no other bird compared – so I watched and waited. And the interesting thing was that almost immediately, the bird began making its way toward my position. It was tantalizing to think the bird might return to the roadside, but every step it took as it hunted brought it closer.

The unique “egret” moved into an open area lined by mangroves, and I thought it might be headed back toward the side channel, but suddenly it waded in the opposite direction – into the open water, in perfect afternoon light, and I was absolutely thrilled! I treasured the chance to take that series of memorable photos of this unique bird – what luck! It coyly stepped behind a tiny mangrove island and took flight, returning to its original location across the open water. I did get a couple photos of the bird in flight as it landed that revealed the mostly white wings with scattered gray feathers to accent its unmatched plumage.

As the “egret” made its move into the open, a vehicle slowly moved into position near where I was standing, so after the bird flew off I waved hello and the lady pulled up so we could share our excitement that the beautifully colored mystery bird had provided such a great opportunity to photograph it at close quarters. I asked what lens she was using and eventually she remarked about the bird’s unsettled identity. She even described one birder as imagining it was a Western Reef Heron, a species rarely seen west of the coast of Africa.

Well that opened up a whole new line of thinking, but knowing how some birders question every identity, and how others – even beginners – throw out some fairly outrageous ideas at times on Facebook and other chat groups, I hesitated about suggesting too much. But it certainly made me think twice and thrice about the identity of this bird. A few miles down the road, after I digested the idea of this being a more unusual bird than I first imagined, I took a closer look at a few of my photos. It was immediately apparent that the mystery bird had a long slim black beak, and no Reddish Egret has a uniformly black beak, and there were other clues too, including its yellow facial color and pupils, not to mention its yellow and black feet.

My next move was to check my field guide, and happily it included a couple photos of Western Reef Herons, including gray morphs and white morphs. Aah, now I saw where that idea came from. But when I had a chance to look at other photos of reef herons on BirdsoftheWorld.com, my primary reference authority on birds, it was obvious that wasn’t the identity of this mystery bird. Then I checked eBird to see what birders were reporting from Merritt Island Refuge. The bird was being described as a hybrid, a cross between a Snowy Egret and a Tricolored Heron.

I’m always leery about the concept of hybrids because they are usually ultra-rare; but this mystery bird was obviously ultra-rare too. There was also an eBird reference that described the bird as a hybrid Snowy Egret x Little Blue Heron, and some birders have suggested a Little Egret x Tricolored Heron hybrid due to its elongated head plumes that are longer than the usual Tricolor’s.

Next, I checked the American Birding Association’s Rare Bird Alert article for last Friday, and there was no mention of the sighting. Nor was there any note or photo of the mystery bird on the ABA’s Rare Birds Facebook Group. In desperation, Monday night, I googled the phrase: “Merritt Island egret x heron hybrid.” Miraculously, at least in my mind it was miraculous, an informative article popped up, written by Alex Lamoreaux and published March 25, 2013, with photos of a very similar bird taken almost exactly 8 years before by Joyce Stephancic. That must obviously have been a different bird, but it was very similar, and Alex makes a compelling discussion of all the identity options that came up then – similar to now (see https://nemesisbird.com/birding/identification/heron-hybrid-merritt-island-nwr-florida/).

Alex was convinced – and is convincing – that the bird was a Snowy Egret x Tricolored Heron hybrid, and that is my take on this mystery bird too, for now. It turns out there was a similar bird that was photographed in 2019 too, so this appears to be a recurring hybridization with birds documented in 2013, 2019, and 2021 – all at Merritt Island National Wildlife Refuge, all along the Black Point Wildlife Drive. Very interesting to say the least!

Little did I know what I was getting into when I saw that white and gray wading bird across the open water last Wednesday. Nor could I have imagined getting such fulfilling photographs of this special bird! And in my mind, it’s still a mystery bird – a most enchanting bird indeed!